I want to help

Pre-war Syria was considered one of the most educated countries in the Middle East, and standards of living were generally good. Eight years of civil war have changed everything.

Over 2 million children are not in school – that’s one third of children in Syria. 1.3 million children who are in the classroom are at risk of dropping out. Over 40% of school buildings have been damaged or destroyed. 180,000 teachers are no longer in service. 83% of people live below the poverty line.* 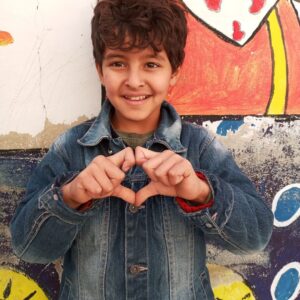 When *Abdul joined the School Club, he was aggressive and afraid. His whole life has been spent surviving war, trauma and domestic violence. Even though he’s only nine, his father often makes him work as an errand boy at a vegetable shop, to supplement the family income. Previously, he worked as a cleaner.

The School Club is a safe place for Abdul to be helped in his learning, and to receive therapeutic support. Our partners aren’t daunted by the huge load of trauma he carries, and their love and care is beginning to make an impact. They say: “During his time here, his behaviour has changed; he is less aggressive and disobedient… Underneath the fear and aggression is a very sensitive boy.”

How is Global Care helping children in Syria?

In partnership with House of Hope., a registered Syrian Christian NGO, we are working to improve children’s educational opportunities, in a suburb of Damascus which was on the frontline of fighting for many years. Described as ‘banditland’, this area is now home to displaced families from across Northern Syria. Most live in dire poverty, having suffered huge trauma through the war.

Our School Clubs are helping children in Grades 1-3 (aged roughly 5-8 years) with basic literacy and numeracy, as well as a safe space to play and access therapeutic support. Because of the large numbers of children in need, our partners are focusing on children who have lost parents during the war, or those who are so poor they would be unable to access education in any other way. Therapeutic interventions – like helping children learn to talk about emotions – are a crucial part of helping traumatised children become ready to learn. A pilot project with 70 children started in early 2019. Informed by evidence and learning from the pilot initiative, a formal School Club project, supporting 90 children, began in September 2019.

The financial aspects of the work will be supported via our existing partners in Lebanon, Out of the Wilderness. Global Care is committed to School Clubs for a minimum of three years.

We have also asked our partners to consider ways of helping older children in the area, including teenagers living on the streets. We hope to receive a proposal later in 2020.

What can you do to help children in Syria?

Can you make a one-off gift or partner with House of Hope? Regular monthly gifts from £18 enable our partners to work sustainably, and to plan new initiatives to support this vulnerable community, knowing they have stability.